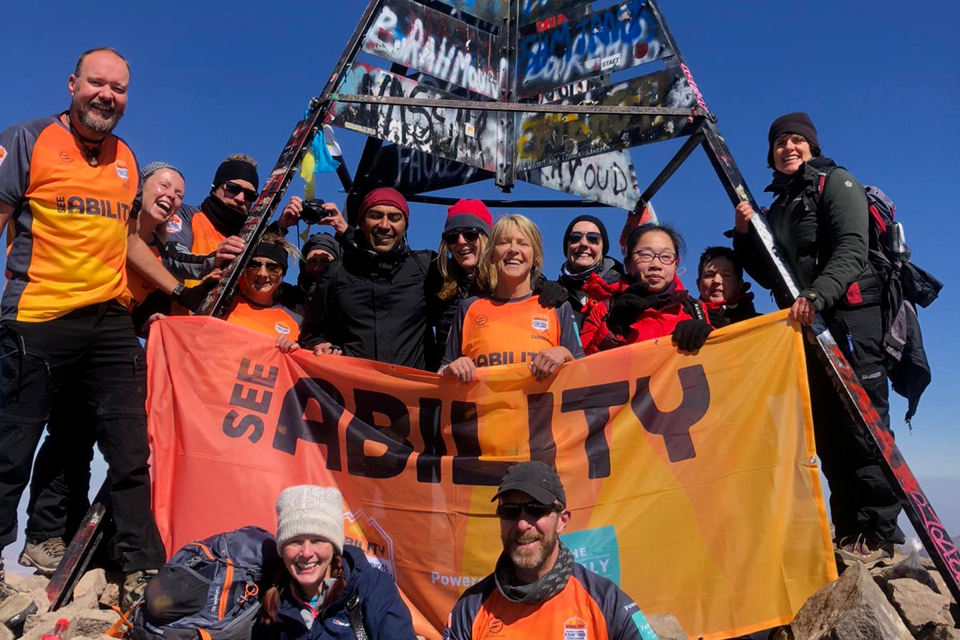 Never one to shy away from an adventure or a fundraiser, I was especially keen to join a Seeability challenge (formerly Royal School of the Blind) when they approached me. Although we have made donations to various charities already, and been approached by many more, this opportunity stood out as we would be guiding visually impaired people to the top of a mountain. Usually I get involved just from behind my desk, this would be far more interesting.

And so it proved to be!

I managed to rope in my colleague Liz to join me and we took weekly hikes up local mountains to prepare for our attempt to climb Mount Toubkal in Morocco at 4167m - the highest mountain in North Africa no less. There was altitude to factor in and then there was the guiding of the VIs (visually impaired) over boulders, loose rocks and icy streams. That seemed like it would be an impossible task - but that is before I met these people! 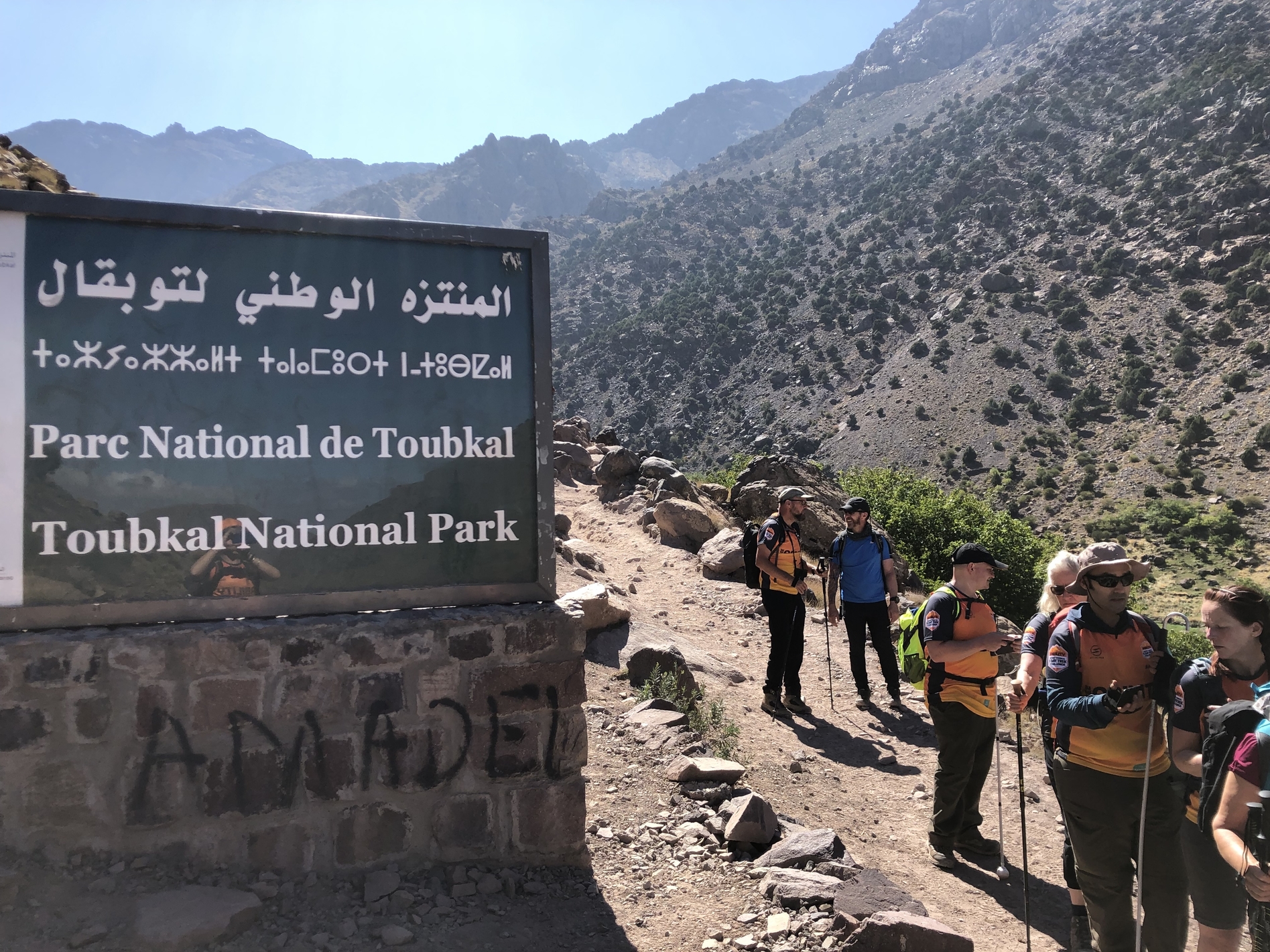 We arrive in Marrekech for one nights rest before the off. A mini van took us into the Atlas Mountains and then we set off. Without previous experience we first noted how others guided before we were paired up that afternoon. I had chatted to Tom, a dad of 5, the night before and knew he was fit (from his passion for Goalball) and had some limited vision. So he walked behind me watching the back of my legs while I gave a constant stream of ...'Step to the left, pick up your feet over rubble, right leg big step up...' When we did manage to chat on easier bits (of which there were not many!) I discovered that Tom had managed already to adapt his life several times as his sight diminished, refusing to be limited by it. A really impressive guy. 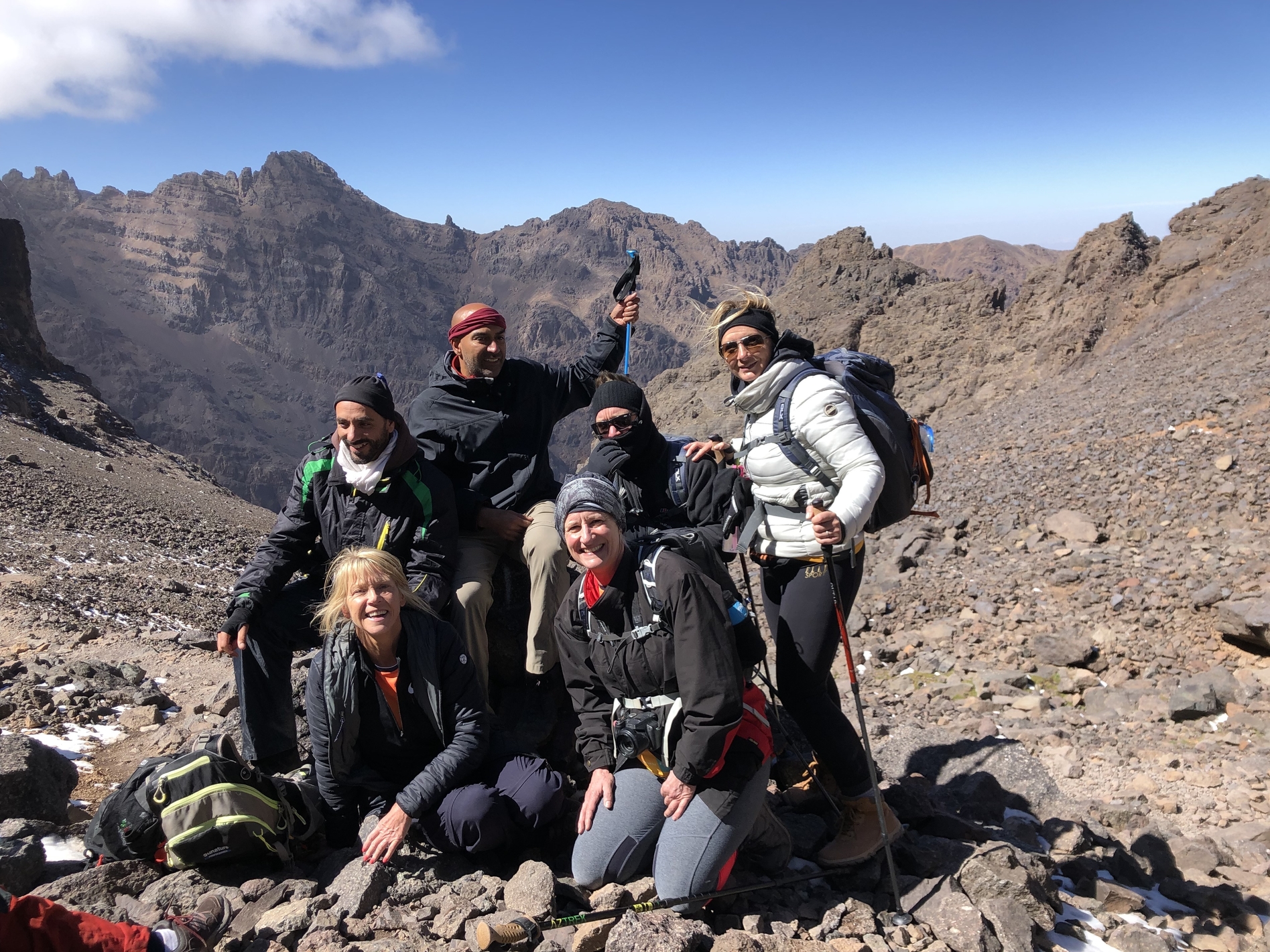 Also in our group were a 78 year old with a blind son who wanted to give something back to Seeability, TV personalities Amar Latif from our tour operator for mixed sighted and VI adventures (TRAVEL EYES), along with Helen Fospero (his sighted guide), Rachel who had recently had 2 hip operations, partially sighted Scott with a British Empire medal for his work in the disability community (who made us all laugh so much!) and an eclectic mix of people from Seeability and all walks of life. We started to get to know each other on that trail.

The absolute faith that the VIs put in us guides really bonds you from the start. It also really helps not thinking about yourself at all on a long hike. We tried to describe the scenery along the way and give them some warning of passing mules, and ensure they avoided the drop-offs! I suddenly got surprisingly good at my left and right! 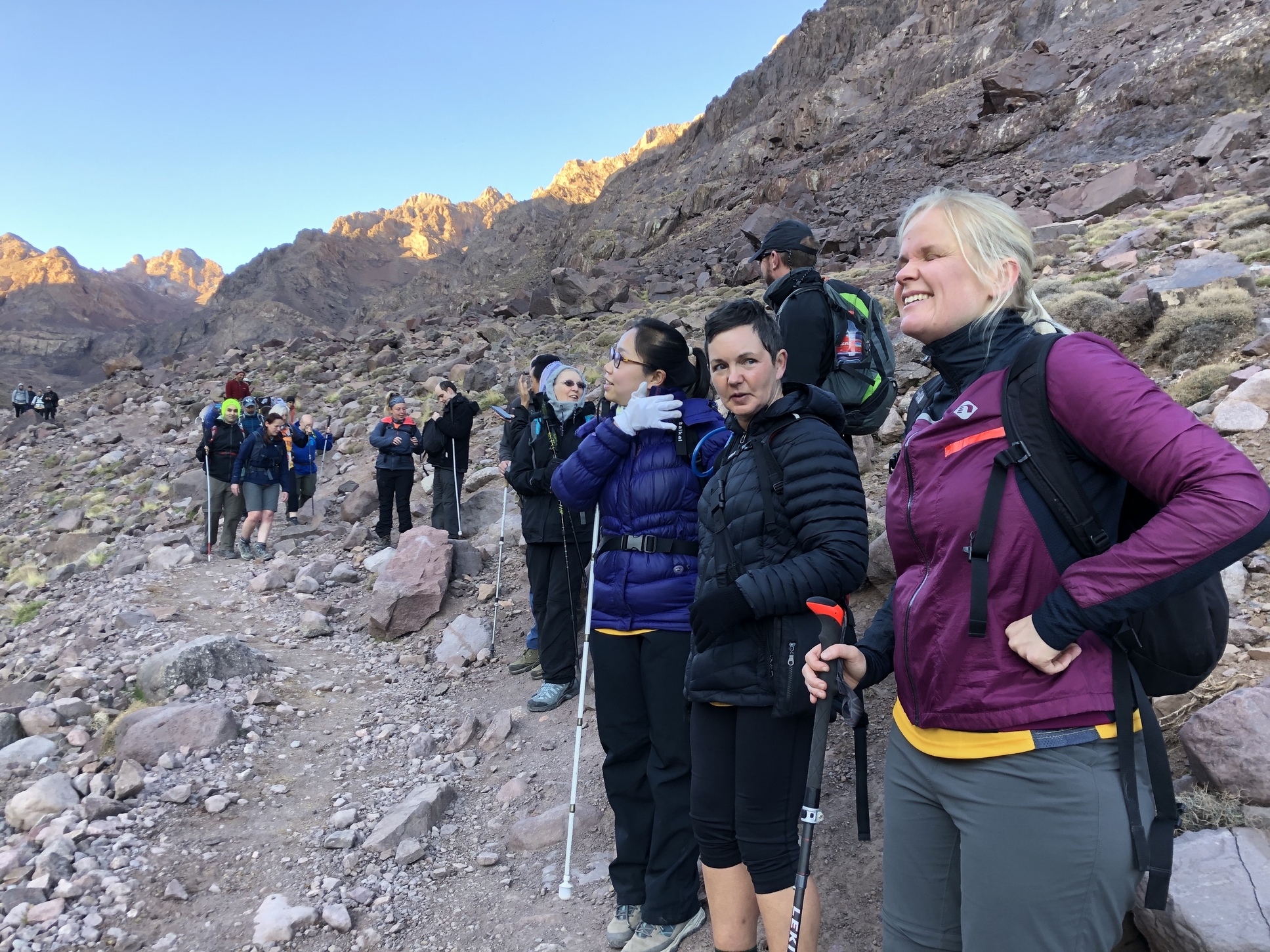 At the end of the first day the light was fading and with that Tom's sight. Once he realised I now couldn't see very well either I'm sure it gave him a fright! But he still loyally followed me to the albergue for our first night. It had been a long day - and however tired we felt from the hiking and guiding, imagine what the VIs had put in, using all their senses to get them there. Arriving at our hostel for the night was an achievement in itself.

Now we got set up in a dorm room altogether. Honestly, that was the best bit. We had such a laugh! No one slept properly due to the altitude and we woke early with a feeling of dread...How could we start out in the dark, for a more strenuous climb than the day before, whilst feeling sick and tired before we even started?! A slightly reduced group set off, and the going was really challenging at first as high winds added to the difficulties.

It was really tough terrain, and each clamber up would be even harder on the way down. We settled into a steady pace - up, up, up - bouyed by chocolate. Half way up there was some snow underfoot, we put on another layer and kept going......to the very top! It felt like an amazing achievement, and we were further rewarded by a sunny picnic at the top taking in the views across to the Sahara desert. 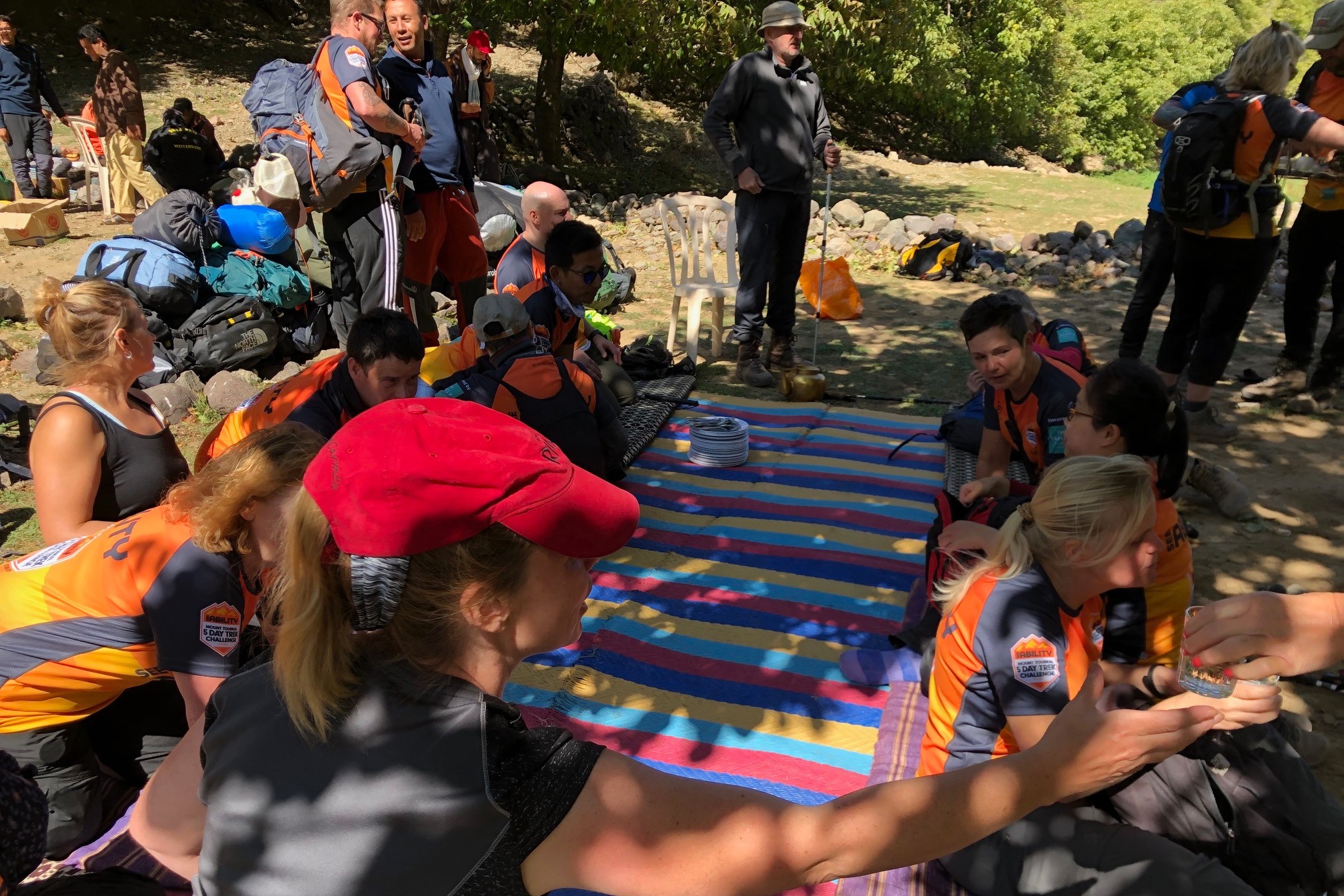 There was another sleepless night (the altitude messes with you) in the chaotic and cheery dorm that night, braving and guiding visits to the unpleasant bathrooms in the cellar. Then we were off again heading down to Imlil where we had started. This time I guided Katrine - a translator with a full and independent life - and a keen awareness of the mountain edge (not surprisingly!) It was real pleasure to get to chat with her and be impressed by her ability to not let her lack of sight hold her back. Finally we reached the end of another long day and gratefully received a glass of bubbly and tasty picnic spread out on a rug in the shade.

Our last night together as a group in Marrakech was filled with more laughter and staying up as late as possible as we were all reluctant to bring this experience to an end. The sighted talked of the priviledge to guide our amazing VI friends. We all learnt from each other on how thoughtfulness and fun can get you through anything. Instead of the peak, we all agreed that the most value thing had been in meeting each other and the time we had had as a group. There is much talk of another challenge in the busy whatsapp group that pings to remind me of what we have just achieved. 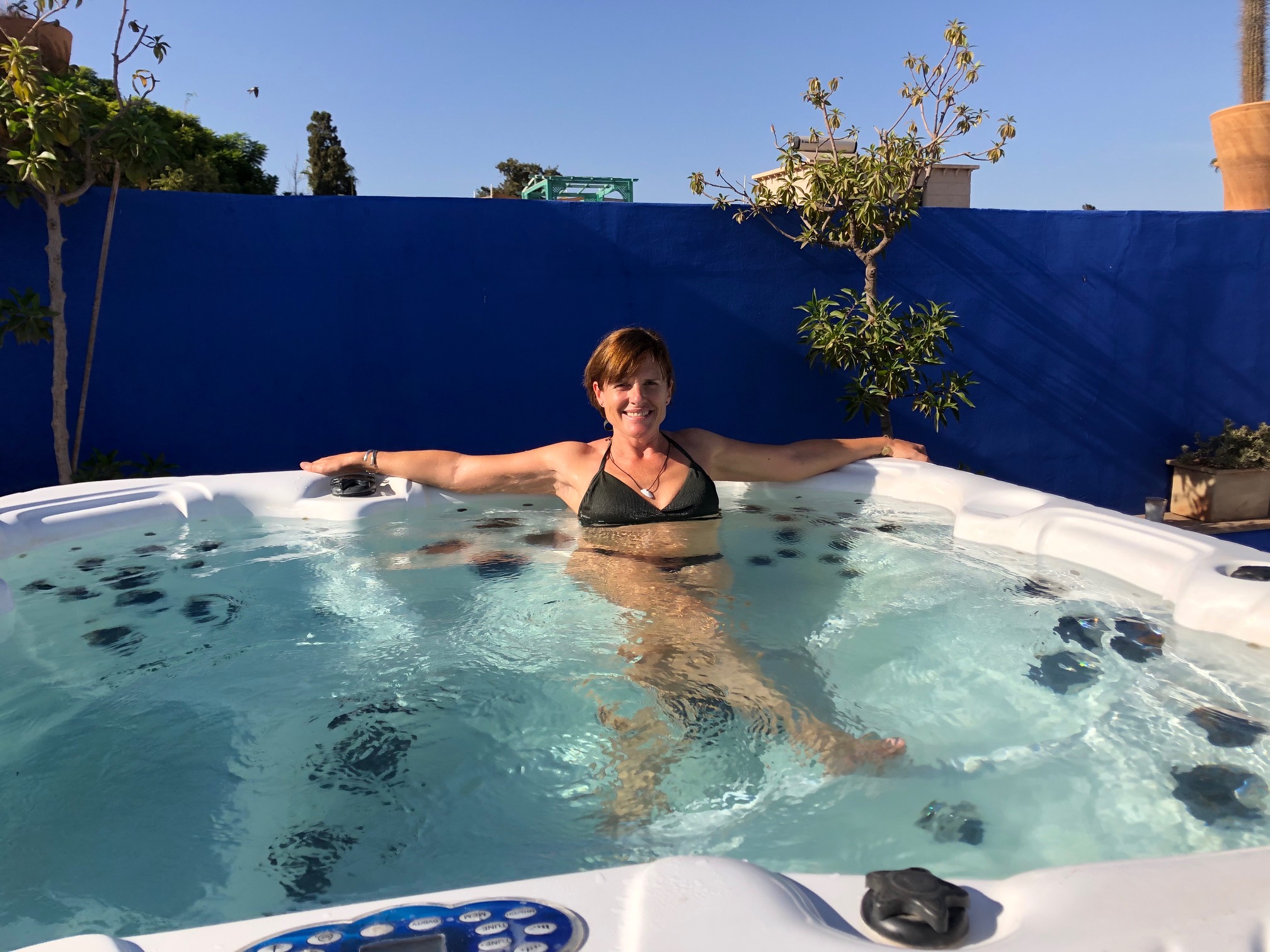 Liz and I needed a couple of days to recover after this strenuous effort so we checked ourselves into the most quirky riad in Marrakech. The Riad Goloboy had unique decor, roof top with hot tub (had to ask for the hot!) and a cool pool in a central courtyard. It was a stroll from the central medina but one thing that really impressed us on this trip was how safe and hassle free Marrekech now is. We thoroughly enjoyed our time here, and managed to buy a few trinkets to take home after some bartering, and admired palaces and gardens in the city. A visit to a Hammam meant we were scrubbed up and massaged to bring us back to a pre-hike state! Wonderful. 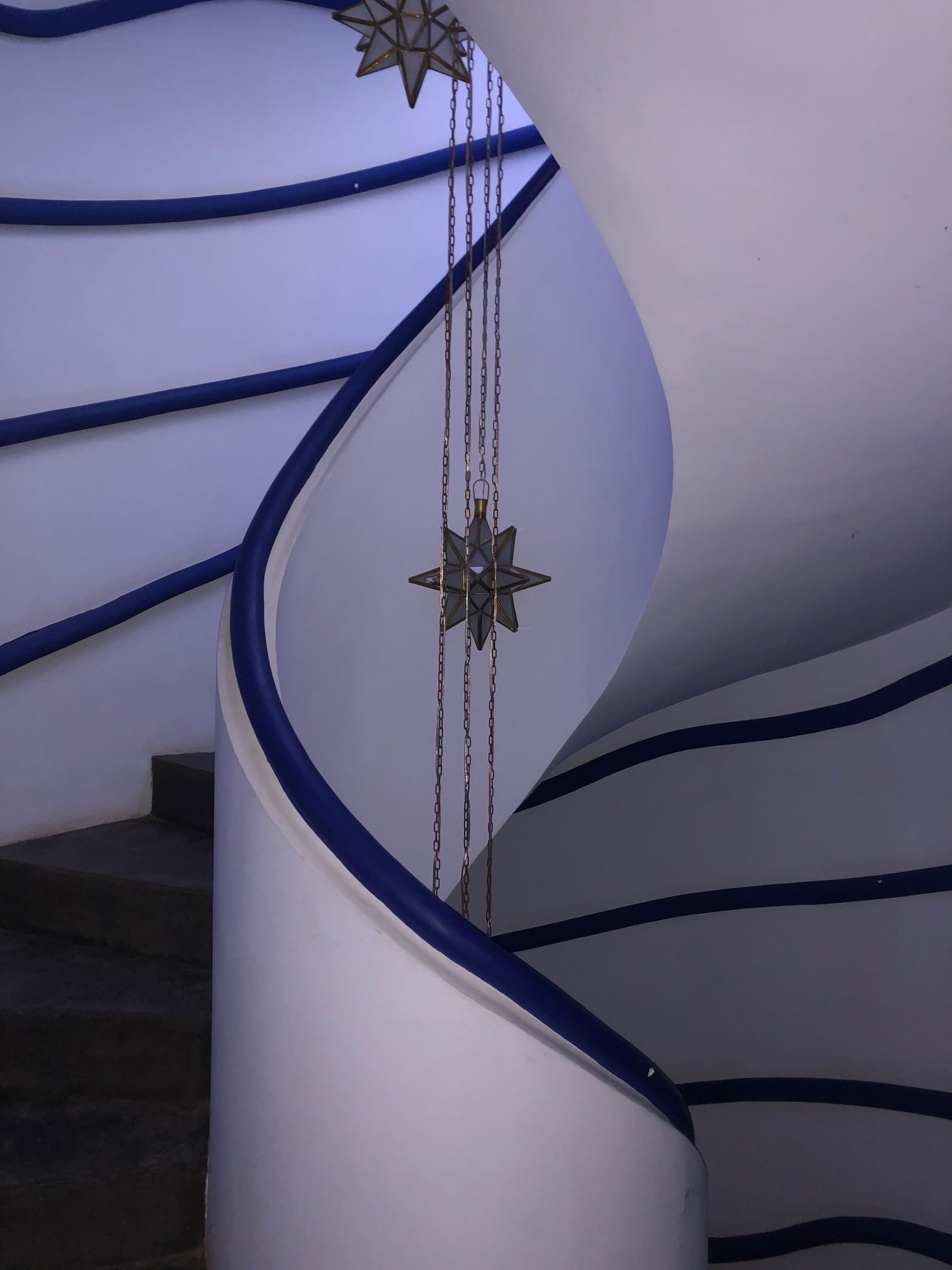 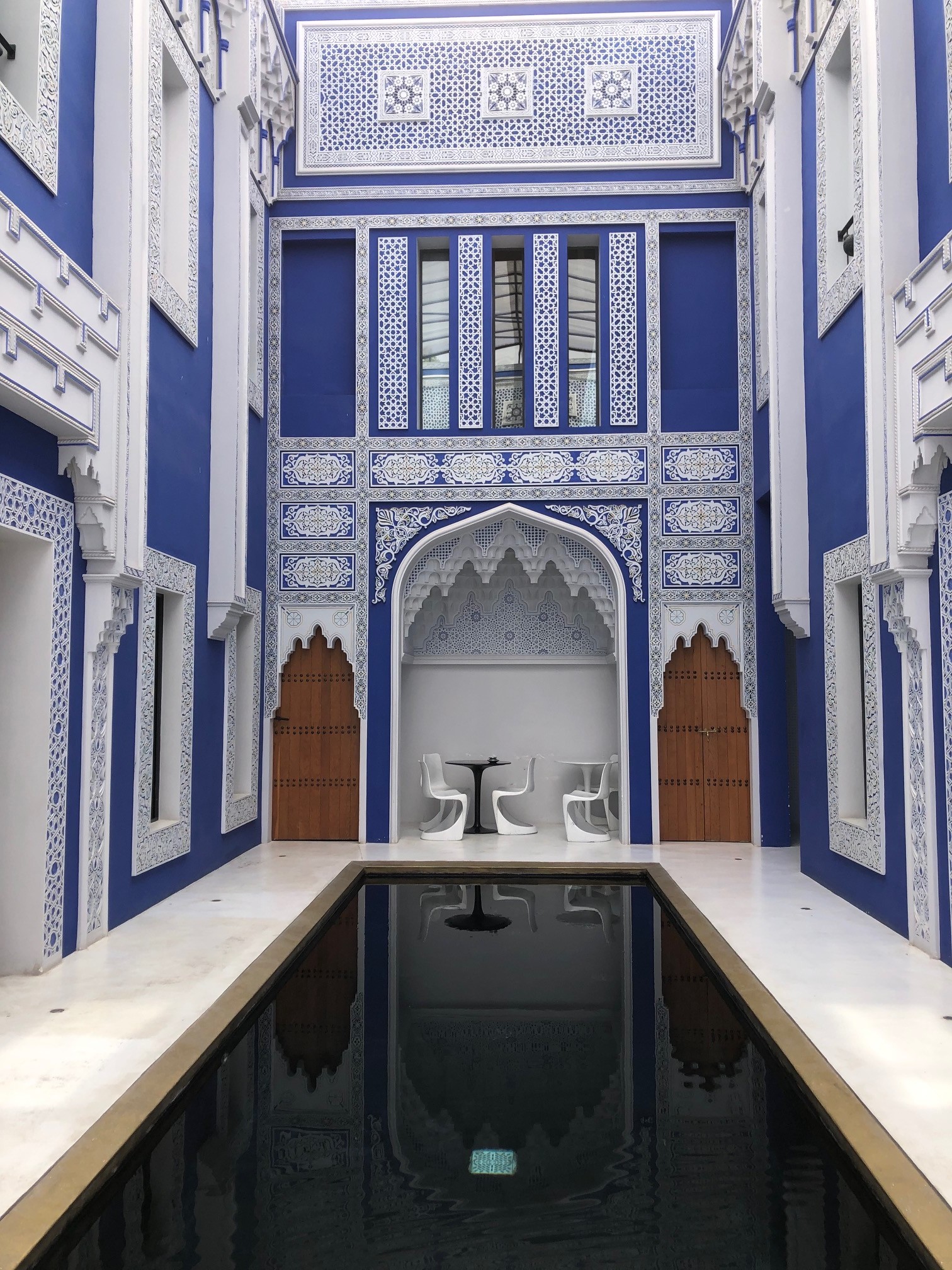 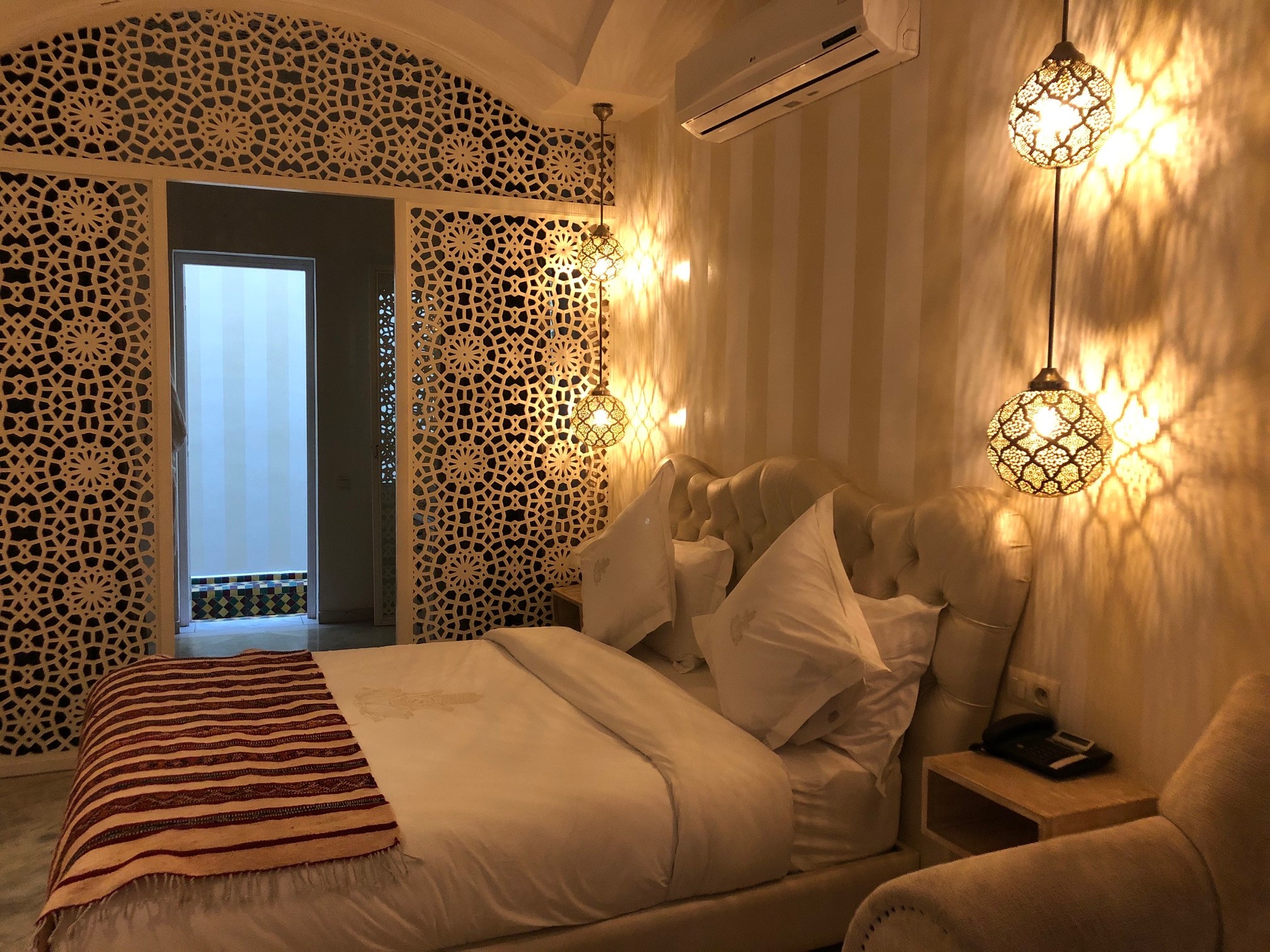